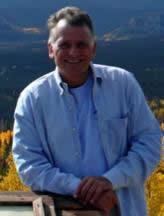 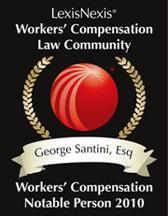 George Santini began his legal career in 1981 as a law clerk for Justice Richard V. Thomas of the Wyoming Supreme Court. After completing an initial 2 year term as Justice Thomas’ law clerk, Santini was requested by the Court to extend his clerkship for an additional year to provide continuity and guidance for newly hired clerks.

Santini entered private practice in 1984 when the former US Attorney whom Santini had worked for as an intern while still in law school, recruited Santini to work for a newly formed law firm which emphasized plaintiffs’ personal injury, employment law and civil rights litigation. Santini soon became a shareholder in the firm and developed an expertise in the areas of personal injury litigation and workers’ compensation.

In 1993 Santini formed his own solo practice devoted to plaintiffs’ personal injury litigation and claimants’ workers’ compensation. That year, he served as president of the Wyoming Trial Lawyers Associate in addition to his work as a practicing attorney.

By the mid-1990’s, Santini began to be contacted by a new type of customer. Insurance companies and claims managers were asking Santini to represent their customers in personal injury actions and wrongful death claims. Because of his understanding and experience representing both plaintiffs and defendants, Santini provides an unusually deep and broad base of insight and knowledge to assist in clients in the litigation process.

In 1997 Santini joined forces with Anthony F. Ross and Ross’s father, the legendary Vincent “Vince” Ross to form Ross, Ross and Santini, LLC. In January 2020, partner Anthony Ross was appointed to Senior Municipal Judge, thereafter Santini continues his practice solo to date forming Ross & Santini, LLC. Currently, Santini’s practice focuses on litigation representing both plaintiffs and defendants in personal injury, wrongful death and other matters. He continues to be recognized as one of the leading authorities in the field of workers’ compensation law in the State of Wyoming. He has been recognized as one of “The Best Lawyers in America” © for more than 10 years in the field of personal injury litigaton. The Wyoming Trial Lawyers awarded Santini its highest honor, the “Lifetime Achievement Award” in 2009.

Santini takes pride in being able to provide innovative, effective representation in a broad range of cases. He provides hands-on litigation experience in matters ranging from multi-million dollar wrongful death claims to assisting clients in obtaining disability benefits. When it comes to his clients, Santini believes each client is entitled to his best efforts to achieve a  fair and just result.